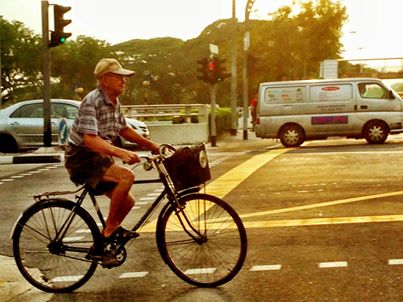 An old uncle... Maybe he is riding to work or to his regular kopi place. You will see them everywhere. They are not on facebook nor will they write in to authorities to reflect the traffic issue.
Pls watch over them , give them just a little bit more time and consideration.
Remember, we all grow old too.
Posted by Taiwoon at 11:28 AM 1 comment:

Now, Khatmandu is not a place you associate with cycling. They are also facing a perennial city issue... traffic congestion and see what's happening there. Wow! When you have so little, you take charge.

Posted by Taiwoon at 7:16 AM No comments:

Steady lah David .. and I know other then the running part, David also is an active cyclist!
This is an interesting way by Singapore Health Promotion board to encourage a healthy living!
This is really inspiring!

Sharing a photo from Francis. This was take at Boon Lay MRT. Wow... it feels like Amsterdam!
So who said cycling in Singapore is just for recreation?
Also check out the Facebook comments


This is another unique place which will be gone very soon. Partly that is. Last year we visited the place and met some really passionate folks who wanted to preserve it. They call themselves Brownies , if u like to know more, click the link.
And please go there quick... almost going be start clearing out  and it is in the Straits time too.
The route was quite complicated as I have not really ridden there much. Luckily I have someone who do. That's our veteran LCSG old bird, Steven Tang. He even made the extra effort to recce the route and find out the history around the place. Starting from Caldecott  MRT station, it was a gentle roll toward Andrew road and then getting hopelessly lost at mount peasant area.
The turn out was huge at 80 pax and many regulars stepped up to help act as markers. That is they will ride in front and place themselves at turnoffs so that the main party can just roll along easily and not get lost. Thank you Panda, Pierre, Ben, Jasper and many others for helping make this a pleasant experience.

Due to a minor accident, we asked the main group to proceed while we took care of the young man.
He apparently jammed his brakes as he approached a speed bump down a slope. Luckily, Eugene LA was there and help dress his wounds. We decided that it would be best he went home and seek medical treatment. After the drama, we went to look for the main group and the heavens opened at Mediacorp. Uncle KC shouted to me: "Call Zoe Tay and see if we can hide at her house.. haha"
It continued raining as we approached BB and we didn't explore much. Still there were quite afew people walking and braving the rain. I guess in the forrage, Claire must be still there, sharing the BB stories.
From Bukit Brown, we cycled to Kheem hock road towards Adam food centre. A hot coffee and yummy makan made every one feel much better.  Stomaches filled, we dispersed at Adam food market and guided the rest back to Caledcott MRT.  Thanks to Steven Tang excellent recce, I now know this place better. And I will come and ride this route again. What a nice way to spend a sunday morning!
Photo link here

I had to travel to Japan for work (2 weeks) and while my work is confidential. I can share this wonderful time I had with Toshi Maeda at his home ground on 21st July 2013 Sun morning.
I had to take a 50min train ride from Yokohama to Tokyo but I felt it would be worth the effort.
Most important reason to be there was to learn how they have managed to get the cycling education going in Japan. And also have spend time with Toshi san to learn about his creative community at Aoyama.

It was really a humbling experience and talking to the Japanese Cycling Association (JCA) volunteers who have been tirelessly helping for many years. Toshi helped me translate my questions and shared really interesting details. The cycling program was only possible because of the Royal family(for the grounds) and Keirin racing association for sponsoring the bikes and equipment.  This has continued for at least 50 years and when I asked how did people know about this cycling program. He just shrugged and said.. “they have been doing this for a long time. Everyone knows.” In a way, I could see the similarities we have done for Lovecyclingsg. Toshi san shared more how things were all linked and with the right attitudes and passion. There could be wonderful synergy with many people. Not for status, not for money. Just a simple dream to make their neighborhood a nice and homely.
Also shared with me this super hidden from view cafe called OVE. I love it.. the environment and the people. I learnt a new word over there. SenSo.... it hard to describe but Toshi san said..... “it just like Zen. Go where ur heart follow”.
Ove is a mixed place. I can’t point a finger what it is.. . Its not a bicycle shop, nor it is design place. It’s like a place where artists, musicians, craftman can gather. Do a small exhibition, show and tell kind of place. I had a really wonderful experience to learn about Toshi‘s neighbor hood. I could tell that Aoyama is very precious and important to him. Thank you Toshi san for your time and generosity. I learnt a great deal and been very inspired.
I will see how I can use this ideas for Singapore!
More photos of a nice day here

Posted by Taiwoon at 6:18 PM No comments: