This is Boon Chun, a chirpy guy who helps out on our Sunday rides covering the video portion. Read his profile and how u got into cycling! 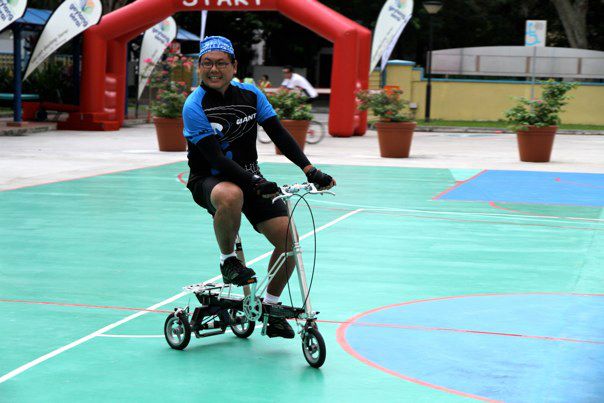 Rider Profile- Q&A
Tell me about yourself
Ordinary guy that has the dark tan and look of a Malay. Malays that do not know me will speak to me in malays because of my look. I quite a shy person that does not really approach people much. A fat-ass weighing over 90kg standing 1.73cm tall. Thats why cannot cycle CarryMe. I had a wonderful wife married for 4 years now but we decide not to have children (at the moment)
How did you started cycling
As a child, my mother forbidded me from doing dangerous things. Cycling was perceived as dangerous to her. I didnt got to learn cycling until 9 years old on a old-school rusty chopper bike style with 3 gear shifts. It even had a back rest. Check out this link to understand what I meant. http://www.sciencemuseum.org.uk/images/ManualSSPL/10319038.aspx
Its during my tertiary education time in polytechnic I started to cycle with my buddy from Lavender to Marina Bay (before the great esplanade and marina barrage was even built) to Orchard road and even as far as Bukit Batok to impress my first love. I was riding a Mongoose MTB. Sold and bought my first folding bike, the Dahon Eco 2 in March 2008 and started riding with My Bike Shop in monthly organized rides.


Why do you like cycling
When I started cycling, I treated it as a form of exercise. It sweats you out and its nice. Today, cycling to me means making more friends. Out of my 300 over facebook friends, half of it involve cycling. Cycling is becoming popular as a form of of recreation as well as a means of transportation. That is when I went deeper into folding bikes in 2008. I was even happier when LTA supports the idea of allowing folding bikes on MRT and buses. Thats why I love cycling, its became a part of our life.
When u met LCSG - how was it like and how u meet us
I get to know about LCSG via an ex-colleague of mine. He mentioned to me about Taiwoon and his blog. So I went to check it out. I didnt join LCSG ride immediately as I was still hanging out with MBS. As MBS got busier and busier, their organised rides gets lesser and lesser. I officially joined LCSG ride after visited LifeCycle when Simon mentioned about a service demo organised by LCSG. On 3rd Apr 2011, I met up the group for Dempsey road Support Japan cum service demo ride. It was a large group. I didnt mingle or talk much as I am a shy person, haha. But I felt the warmth and kindness this group having. Its like a big family. This big family also like to take alot of pictures and the ever popular Taiwoon's pose
Your steel horses- names and more details.
- Dahon CurveD3 Folding Bike – Bought in 10 June 2010 in MBS. My commute bike to work
-Dahon SilverTip Mini Velo Folding Bike – Bought in 1 October 2010 in MBS. Conquered OCBC 40km, LCSG 128km twice, King Of the Hill, Pengerang rides
Cannondale Trail SL4 Hardtail MTB – Bought in 20 August 2010 in Cannasia @Vertex. Conquered Kukup, NUS Cyclohunt, Changi Coastal Road x 2 rounds
Your favorite cycling kakis
Obviously LCSG. My closer kakis in LCSG are Panda Leader, Secretary Boo and Sweeper Vince. These are the ones I usually ride with to LCSG meeting points. Panda Leader gaves me the deepest impression because he is the one I can remember very well in Woodlands Waterfront ride, shouting very loud. Then, I had not join LCSG yet, but I was attending the same event while riding with him.
Your favorite cycling route and LCSG ride
Do not have a favorite cycling route. But do not like heavy traffic route such as Orchard Road. My favourite LCSG rides will be Pengerang rides, the Cycle Hunt and the 128km rides.
Your role at LCSG
I am the Videoman! I like to video down LCSG rides with my faithful old Creative Vado HD
video footage here.
Your feelings after and during organising LCSG rides
Very organised rides. People are very self-initiated, humbe and caring. Funny as well, such as Mr Zack, Aunty Mary and Esther. That is why I still hang around this group
Tips to share with fellow riders
My tips are all in my videos...haha. Go check out my videos in youtube. (Advertise abit)
Other things to share.. Life motto etc
Complaining about how un-safe cyclists are is not enough. Every walk of life  has good and bad people. Do not judge or condemn them only when you see the bad side of things happened. Do something about it. Create awareness, act responsibly. It all starts with me and you.