Give me the space and I will follow the rule

This is Francis article in Chinese papers which I highly recommend you read. 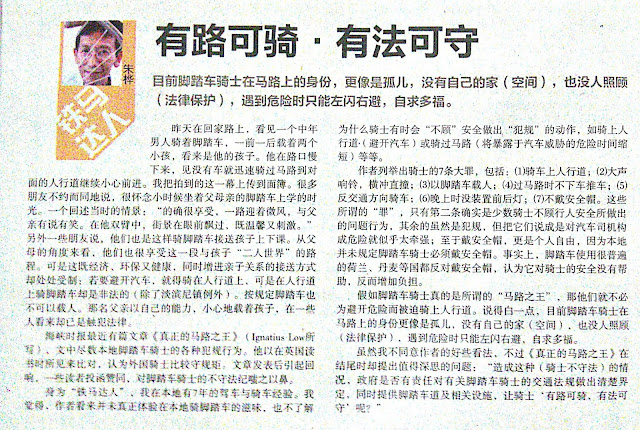 "Yesterday when I went home, I saw a father riding a bicycle and carrying two kids, one in the front and the other at the back. He yield slowly at a junction, checked there is no car around and he ride across the junction quickly. He continued on the pavement carefully. I snapped a photo and upload it to the Facebook, many friends share their memory of being carried by their father/ mother's bike when they were small.
"It's really an enjoyable moment, wind blows in my face, talking and chatting to my father. Watching the street scene flow by while sitting between the large arm of my father, I felt excited and warm."
A friend told me. Others shared that's how they bring their kids to school, as a parent, they all enjoy this "moment of two" with their children on their journey.
However, this affordable, eco friendly and healthy way of commute is being marginalized. If you want to avoid the danger of cars, you need to ride on the pavement, and which is illeagal (except Tampines). It is also illegal to carry people on your bicycle.
To someone, a father using his own effort, carefully carrying his kids between home and school is breaching the law.

Recently there is an article publiched in ST <
As an "Bicycle-Master", I have more than 7 years of driving and cycling experience in Singapore. I feel Mr. Low does not have a real taste of riding in Singapore. He doesn't understand why sometimes it is necessary to make an illegel move. e.g riding on pavement (to avoid car), or riding across pedestrian crossing (to reduce exposure to the danger of cars).
Mr. Low listed 7 sins of the local cyclist:
1) riding on pavement
2) riding their bell threatening the pedestrian
3) carrying people on bicycle
4) riding across crossing
5) riding against traffic
6) no front and back light at night
7) not wearing helmet.

Only (2) is really a bad behavior and should not be allowed, and I agree there are a few cyclists belongs to this group. The rest, technically illegal, but he is pushing too far when he said these behavior are "endangering" car drivers.

About the helmet, there is no law to force cyclist to wear a helmet, it is a personal freedom that each person can decide for himself. In fact helmet law does not exit in all advanced countries with high population of bicycle. They generally agree helmet doesn't add to the safety of the rider, but increase the burden for cycling.
If cyclist really is the "King of the road" as claimed, than we shouldn't see cyclists being forced onto the pavement. I feel local cyclist more like the "Orphan of the Road", they don't have a space they belong (no bicycle lane), they don't have proper protection (law does not protect them well). When confronted with (car) danger, they just have to jump here and there to avoid being hit.I don't agree with the view of Mr. Low. However, at the end of his article, he asked a very valid question:" Is it unwillingness on the part of Government to lay down the law clearly for cyclists and provides the necessary cycling lanes and other infrastructure that will engender orderly behavior?"
Francis Chu