Now isn't this cool? If we all can just show abit more consideration for each other, life can be so much nicer. And Darren did another nice thing in return. He went and commended the Bus Driver for being such nice road manners on SBS feedback. What comes around, goes around!
Darren W L Siow

Just had a simple but pleasant encounter with an SBS bus.
Location: Boon Lay Way, bus stop near Jurong East MRT, in the direction of Boon Lay.
Vehicle: Service 99, SBS7621M  18th July 2012
Incident: I was approaching the bus stop where Service 99 was signalling right to leave the bus stop. The driver saw me in his wing mirror and stopped to let me pass. But by then I had slowed down to let him move off from the bus stop. He waved to me in thanks via his wing mirror and exited the bus stop. In turn, I waved back, feeling good that the bus, which had "right of way" to exit the bus stop actually stopped to let me pass. This is quite rare nowadays as we see more & more aggro drivers on the road. I hope this trend continues, and that more cyclists and drivers can share the road in peace, giving mutual respect both ways. 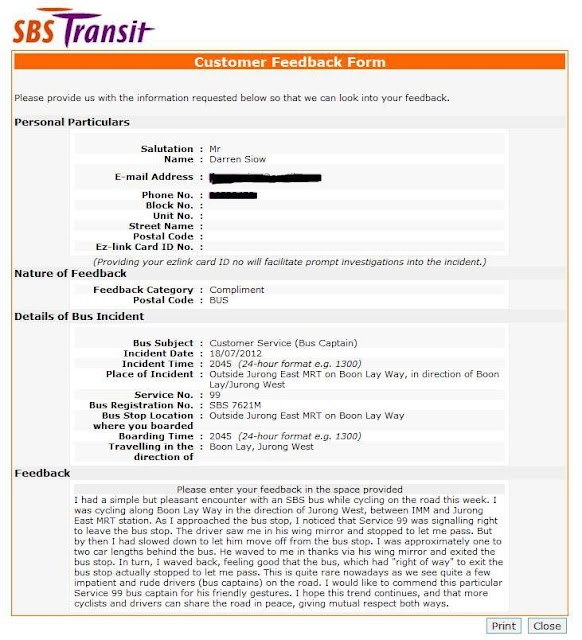