Posted by Taiwoon at 2:56 PM No comments:

Cycling was put behind me for almost 4 years after my accident along Mandai road, lost and forgotten until I moved into a place in the North called The Nautical (TN).
It never occurred to me that our place is surrounded by PCN and many places of interest. On 28th Feb 2016, a lazy Sunday morning, one of my neighbors suggested that we go for a short morning breakfast ride, just the 3 of us.
After the ride, this idea struck us to “jio” (invite) some ‘谈得来’ (nice) neighbors for a short ride, thus the journey of TNers (Residents of TN) began. Our first group ride fell on 6th Mar, a short ride (less than 15km) from our place to Sembawang Park, we visited the amazing Black and White house and the old mosque. Notice the equipment we had then and now are worlds apart. 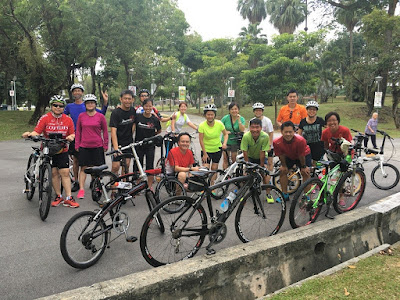 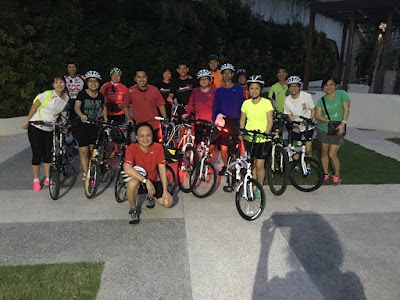 More rides followed, to name a few,
Later, kids got involved, we planned all rides on PCN for safety reasons. They are thrilled and always looking forward to weekend rides, waking up at 5am waiting for the event to start. 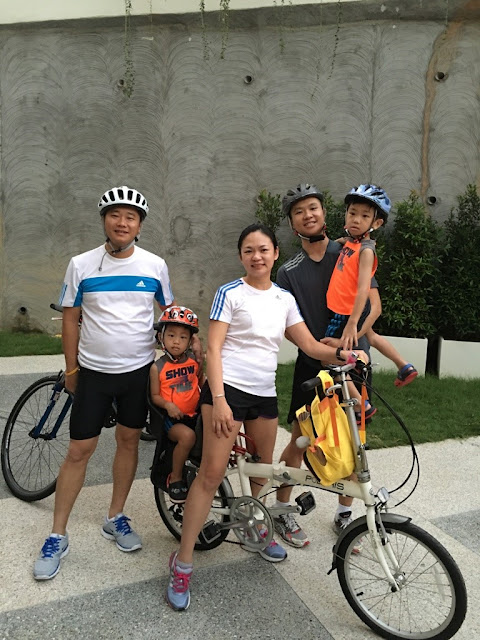 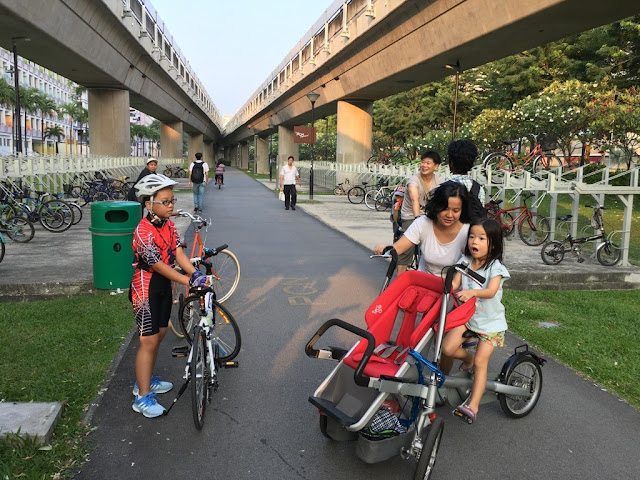 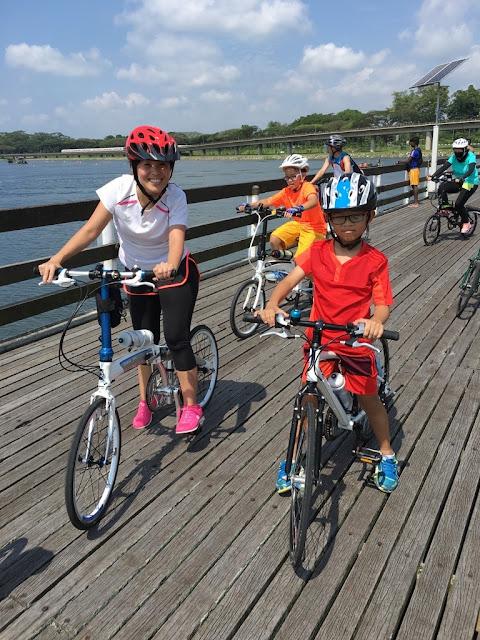 We also did seen and be seen ride as a group and it was really nice. 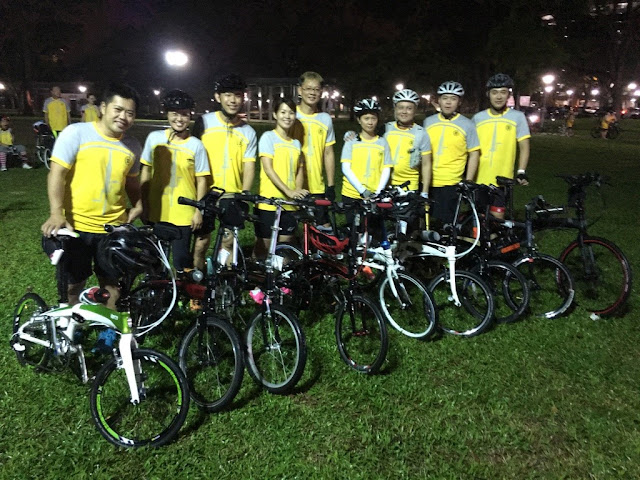 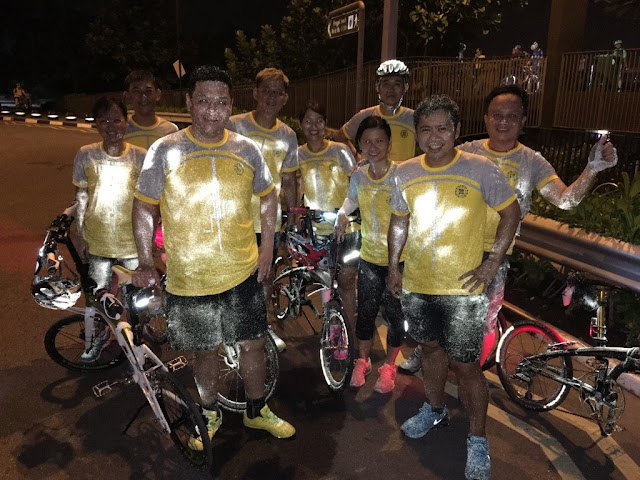 The group grew, more and more TNers joined our (almost) weekly rides. Some creative neighbors who came out with unique designs for our first edition t-shirt for guys, ladies, kids and even a baby version, orange, turquoise, navy blue and yellow respectively 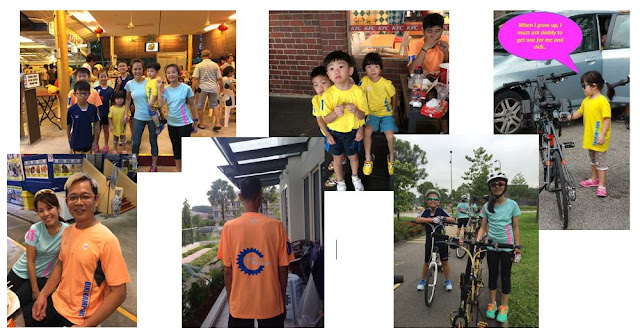 One of our biggest turn outs came close to 50 riders (The attractions we came across included Big Splash, Marina Barrage, MBS, Merlion, F1, Kallang River). I think we occupied nearly 25% of the sitting space of Old Town Restaurant during lunch. 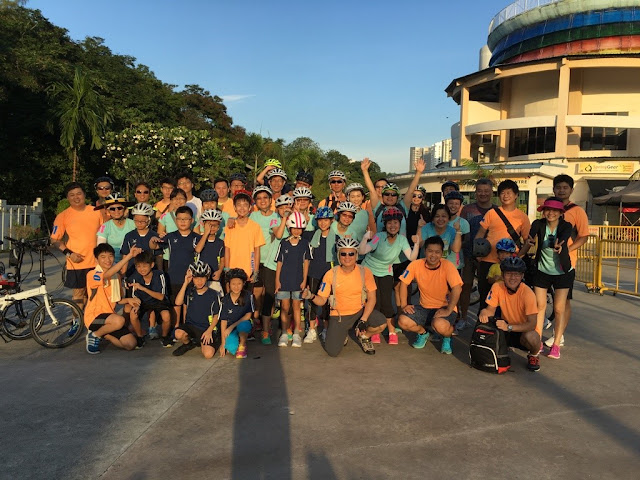 As we grew, things started to fall in place, there were route planners, medics, logistics and transport planners, ‘makan’ organizers too. We even have an admin section to help announce our next trip, compiling the attendance list, places we are visiting, also some important key points, they are really professional. Some of our domestic helpers also join in the rides helping to look out for the kids and also get to have some exercise and enjoy the day with the TNers family. Our community spirits grew by leaps and bounced in such a short span of time. 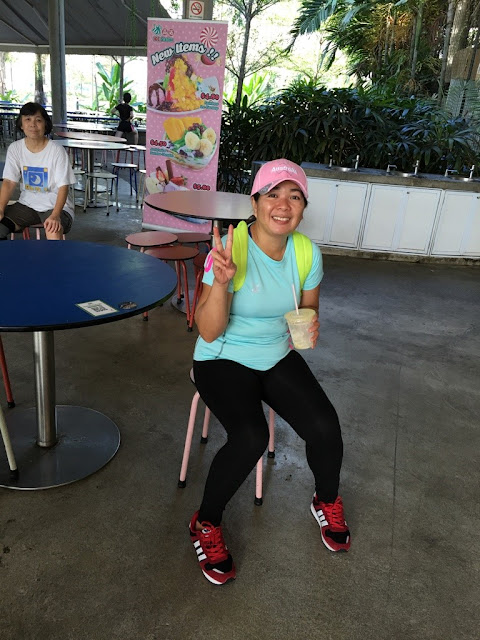 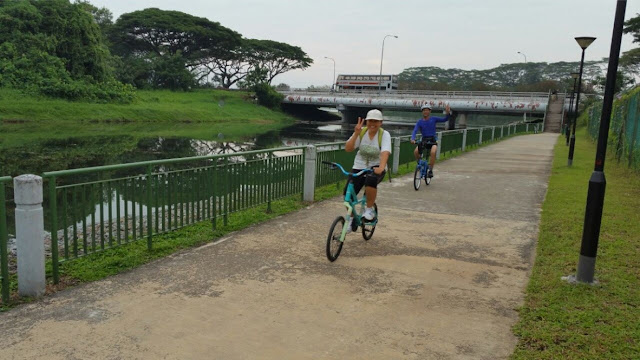 Cycling builds towards a healthy lifestyle, also tags along with some special moments: 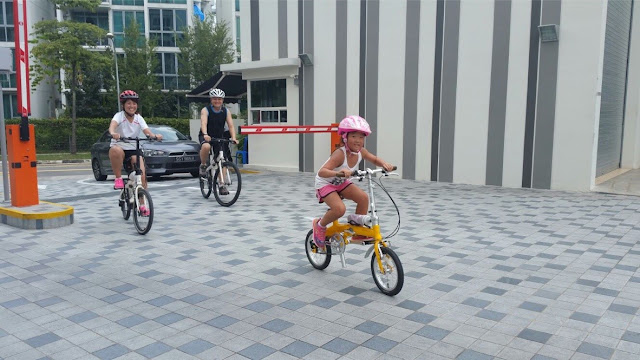 One of our youngest riders, a little 8 year old named Shai-ann, completed several 25km and more PCN routes with slopes, finished Mandai PCN on a 14’ single gear. That’s an achievement even many adults can’t compete with! 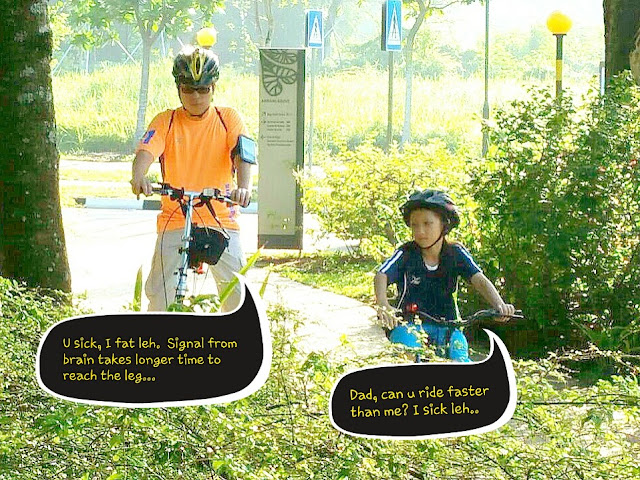 Another 9 year old, Kerryn, was unwell for the past 3 days but rode the entire 25km with a bike weighing a ton (in my opinion), I personally thought she would drop out but she was determined to make it to the finishing line……Steady!

Mr Alan, who just celebrated his 60th birthday, had a near death motorbike accident 8 years ago. He couldn’t ride for 10 mins without stopping when we first started. He was among the first few finishers who completed Mandai Slope to the Zoo just recently. This is very respectable!! 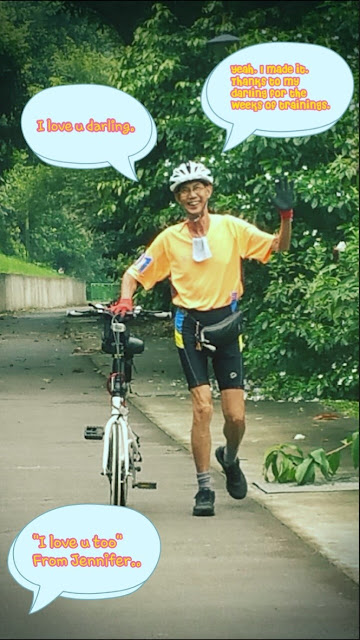 Our first biker’s casualty, he was injured skidding along Seletar Loop. A strong guy, with an iron leg, big lungs and a bigger heart. He is recovering well and will join us soon. 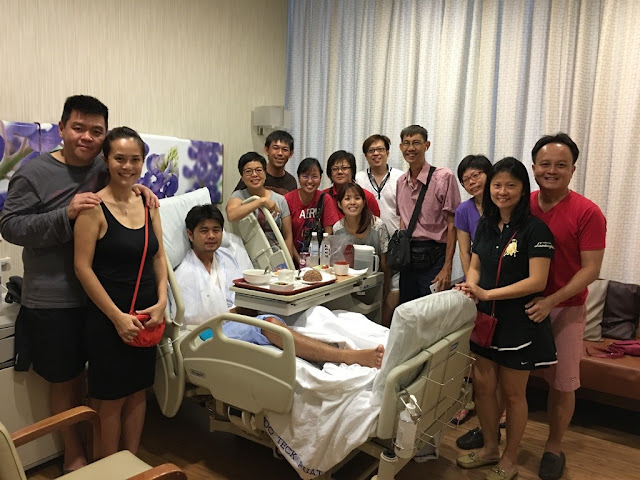 I get this a lot from my kaki about spreading ‘poison’, sometimes I’m just wondering how much ‘damage’ I caused, I meant for it as a constructive suggestion…..haha. True enough, the ‘poison’ started from borrowed bikes, rusty frames, broken spokes and non-functional gears giving way to lighter bikes, more efficient gears, some even started reading about parts and paying more attention to accessories. The ladies were discussing about their attires, matching with different colored shoes and helmet. Old bikes and those often regarded below par were slowly struck off and replaced by shining sub 10kg speed machines. It’s really getting into their heads.
Most of us are on foldies and small wheel bikes, flipping Carousell and Togoparts to upgrade parts and buy accessories became part of our favorite pastimes. For many without a single bike, till today, at least 3-4 bikes per family, some up to 6 in less than 2 months, the way I look at it, it’s contributing to the economy.

We started off as a bunch of jelly legs and ‘cannot make it” (CMI) riders, I remember our first ride to Mandai PCN, quite a handful turned pale when going up those steep slopes. In a short span of 3 months, most of us easily conquered the same route again, even the kids are racing ahead of us. A few daddies are carrying a load of more than 30kg of bikes and kids.

Cycling comes with many incentives, not only do we get to lose a few unwanted pounds, it also strengthens the bonds between neighbors. We have regular events such as BBQs, Birthday celebrations, Tea appreciation sessions, tasting each other’s tantalizing culinary works of art, daily chat groups which, if left unattended, could easily accumulate hundreds of messages in hours. Everyone would come together when someone “chut” (bought) new bike or some new accessories. It has now become a regular sight for kids riding in the compound in the evening abandoning the television and mobile games and to the extent of setting up their own ‘cycling gangs’ and chat groups.

Little did we realize, our actions discreetly promoted a scene not commonly found in today’s context ……. Kampong Spirits……… an intangible item that money can’t buy. Cycling becomes an avenue, an opening line or merely a reason to start a conversation. I had parents claiming that their TV is becoming a piece of furniture, no one is watching and it’s collecting dust. Telephone bills and data plan bills used to be high, but now do not exceed their subscription package. Kids would be running and cycling every evening, ladies are busy cooking up some “smell already also cannot tahan (resist) recipes and guys will be sitting around discussing on upgrading parts or a new bike project.