Loosely translated " As you journey through life, you might be recognized, which is unexpected. Tell yourself when you have a small influence, use what small force to help others. When you have a big influence, you have to use a big force to make this world a better better." This was something Frogman "wa da" posted on his facebook sometime back.

Today is a time for my self-reflection. Lovecyclingsg, a group I co-founded with Francis back in 2008 has grown to way bigger than I thought. Some thing must be right, I think.
We come a long way but staying relevant is never easy.  Then what is relevant? Is it all about keeping true to non commerical nature, E.R.P and community kampong spirit?  How do we keep the "wheels" spinning, week after week? I know we got something good going but how to sustain this level of effort?
Mentally, I am tired... dead tired. Like fizzy pepsi without the gas. Punchek and peng sang. Perhaps a time out would help.......every one needs a break.

Email ThisBlogThis!Share to TwitterShare to FacebookShare to Pinterest
Labels: cycling awareness, helping others, improvisation, self reflection

Another cool Dad with his kids. This is KT!

Saw this on facebook and it made me smile. This is KT and his kids going to school! More on this bicycle here http://www.circecycles.com/helios.php
Posted by Taiwoon at 9:44 AM No comments:


Not another bike!! Seriously, I didn't buy it and I am not complaining. It was a very nice birthday gift from Kim for my birthday last Oct 2012.  She knows that I love bicycles and felt that this bike suit me very much. She also revealed originally she wanted to get me a Go-Pro camera... dunno how come became a bicycle...any way.... I am ok!
Tokyo bike is Old skool and not racy at all. Sensible and just what a bicycle would look like if u ask any one on the street. More here if you want to know more. And I am not paid to sell Tokyo bike... just sharing my experience
The bicycle is a 650C wheel bike, which is good for shortie like me. More nimble then a 700c but more stable then a 20".  It rolls well and esp on smooth tarmac, very smooth and quick. Not race race quick but glide quick. Components wise, is a shimano "dunno what series". I don't really care as it shifts ok and the chromo-frame is quite comfortable. Changed out the handle bar to a sweep back version and brooks flyer seat for a even comfy ride.
Featuring a carradice pendle bag which I can keep my DSLR and barang barang like medical box, tool kit and all.  I can easily swap it to the bike using an allen key to loosen the mounting bracket (along the bike seat rails). Sometimes you see it on my moulton, sometimes here on Tokyo bike.
Yes, its abit uncle but I like it very much. Perfect for slow down smell the roses kind of ride. Thank you Dear!  Now enjoy the photos!

The most happy and inspiring photo I saw yesterday! Awesome Dad!

Posted by Taiwoon at 7:26 AM No comments: 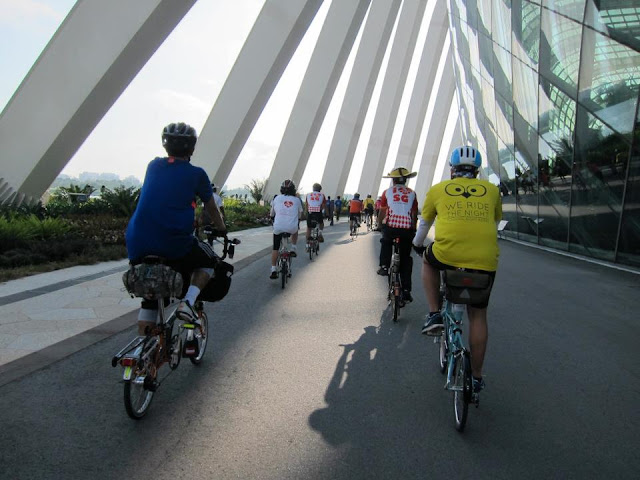