It rained the day before for the whole day and chances are today ride will be the same.  Half expecting that most of the folks will drop out.. I decided to carry on the ride. And I was blown away! About 30 turned up!
Some even rode to the meet point....and as if heavens wanted us to ride... the rain stopped. So happy. Even happier,  Brother Alvin of Love the fold  and "Nuclear powered" Paul joined us for the ride as well!
The ride started pretty smoothly and the pathway was quiet and peaceful. We stopped by the Chingay mobile float park and took some shots of the mobile display with riders. Reaching the Singapore Flyer, it started drizzling again and by group decision, we decided to ride on. We snaked along the slippery paths, crossing treacherous metal gratings and went pass many historical monuments...not really the best conditions to see them...but all who rode now know where is the old Satay club...and also the original Raffles statue. :)

Rolling along the Singapore river, we chattered and laughed, at the total craziness of the whole ride. We rode through puddles, splashing along and the "gentle" pelting of rain... cold as it is. The strange thing was...it was fun! Yes, it will be a royal pain to clean the bikes later... but it was fun!
We reached Vanguard which was closed and many peeked thru the glass windows to see the old new bikes.. I think some will be back - like Lee who loves pashley and all things old..  Zion market was the next stop and the hot coffee/tea/prawn noodles soup was great... man, it was cold!  Following we headed toward Lifecycle to see the latest range of Dahon. It must be a real surprise for Simon too as he didnt expect us to ride in the pouring rain. Resembling a pasar malam... we crowded into the shop and oggled at all the cool stuff.


Bidding goodbye to Simon and Co of lifecycle, the group went towards the direction of Jalan besar with the promise of very very good wanton noodle. Rain was getting heavier but no problem, we pressed on. Our motley crew of foldies, oldies, MTB, hybrids drew quite lot of looks from the passerbys.   I think because all were laughing and smiling-- in the rain --Crazy pple. :)

Clarence's Wanton noodle shop recommendation proved to be really good. It was the same standard as a hongkong Wanton mee... This means the wanton is a fistful rather then a 20ct size... and noodles are just rite with a little oil and soya sauce. Best of all it was manned by only one guy who had to serve up about 15 servings all at once.

After that, we headed toward lavender MRT and ended our ride there.  A special ride with a special group of friends. Bounded by the love of riding and friendship. Salute you people for being crazy enough to ride in the rain with me....shivering and laughing... Till the next ride!
More photos here
And Matt's photo
Posted by Taiwoon at 8:30 PM 7 comments:

Wow... Certification for BMX riders... I wonder what's next? Certification to have fun on bikes? While I do understand safety is important but it seems to have just zapped up all passion for the sport with the word - CERTIFICATION.
What do u think?  What would be a better approach? More Information taken from http://www.cycling.org.sg/

"TAMPINES BIKE PARK - BMX TRACK - Riders The BMX track at the TBP will be open to riders from Tuesday 1st February 2011 Track use will be FREE at least till 31st March 2011. In order to use the track the rider needs to be 'Certified' as suitable to use the track. The Singapore Sports Council (SSC) and the Singapore Amateur Cycling Association (SACA) have arranged for qualified 'Certifiers' to conduct these tests on Saturday 29th January and Sunday 30th January. The BMX track will be open only for the conduct of these tests on those two days. The fee for the test is $ 30 (non refundable) Candidates will need to attend a presentation covering:
There will be a short Theory Test covering the above.
Candidates will then undertake a practical test covering:
Candidates who do not pass the test can apply to be retested after a minimum of two weeks. A new Test fee will need to be paid for the retest.
Registration: Tampines Bike Park (Tues-Sun: 8am to 6pm)"
Posted by Taiwoon at 12:34 AM 2 comments: 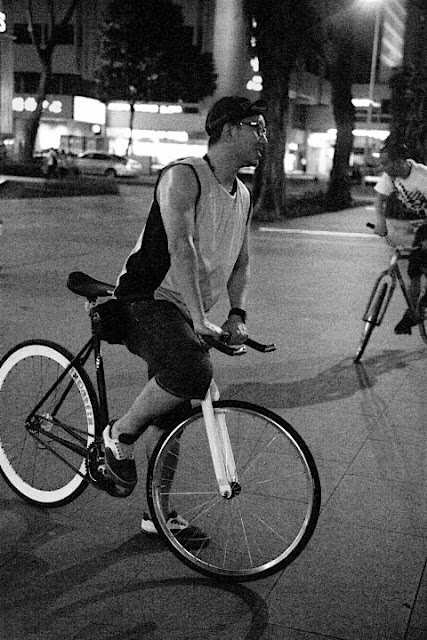 Ever seen what Fixie bikers can do? Come on by TR bikes at Lorong Batu, 12th March  to marvel at the talented riders with their amazing tricks....oh..TR bikes are also giving some good discounts on their shop items too! Lastly, bring ur cameras! It is going to be fun!

TR facebook for more updates...
Posted by Taiwoon at 5:14 PM No comments:

Carryme parking lot at my workplace

You know u are at a cool place when u see 3 Carrymes parking like this.. and this is my work place. Yeah! The foldies are getting lots of eyeballs and smiles.. and the foldie virus is spreading ....
Posted by Taiwoon at 10:38 PM 6 comments:

Email ThisBlogThis!Share to TwitterShare to FacebookShare to Pinterest
Labels: carry me, fun, in the office

When was the last time you went to the city area, Esplanade ... yes where Satay club used to be? I remember when I was a kid, my family would go to satay club, al fresco style. They would just put the satay and you eat. After which the hawker would come back after you are done, count the sticks and you pay. All by honor...yah rite.. when the rain comes... everyone runs, without paying...poor satay men! Well this are all just memories as the satay club is gone. But I can show u where it was... Come, join me and play tourist and go do a City ride.... and eat!! very suitable for new riders!

Nice view of the City scape, MBS, SG flyer, Esplanade. We will also passing by historical sites like the Civilian war memorial, Cenotaph, Padang, Asian Civilization museum. Next take a touristy photo with our Great ole Merlion. Then it is a nice leisurely ride along Singapore river, stopping by Raffles, and Vanguard bicycle shop and end at Zion food market for some nice Kwek chap or char kway tweo. Added bonus - we will go visit Life Cycle

38 friends, bicycles on 3 bumboats headed toward Pengerang early on Sunday. It felt like a Army mobilisation where the team leaders were shouting for attention and getting their group sorted. "Got bring passport? Where is Chris"...Never the less, everyone came on time and very soon on the bumboat chugging towards the ride destination. Joining us for the first time are Billy, Evon, Wendy, Benny and a few hard core riders. They had just did a similar loop yesterday and came for today ride... talking about commitment!
Heaven was kind to us, it was slightly overcast, not too hot, not raining...Just right for riding. Covering the rear was Andy until his crank decided to give up on him. Still he had fun riding on a taxi and roaming around the town looking for bicycle shop to repair the crank...and rejoined the group later.  Many smiles and friendly banter amongst the rider.... telling their heroic stories about "last time...." It was also very impressive to see how fast KC changes tyre , Mr Teo repair the brakes ...which will put the Ferrari mechanics to shame.
We reached the Ostrich farm around 11am and had Ostrich steak, omlette, love letters and all things related to Ostrich. The gentleman in charge also gave us a group discount to visit ostrich farm where we were educated in the proper way to open the Ostrich egg...also about how come some of the birds have partially bald backsides. The balder they are, the more productive.....
We had "own time own target" lunch at the town area where Clarence and team went for lobsters, some went for bar ku teh... and all good stuff. Me and Matt roamed around the town, taking photos and looking at the old shops and run down stuff.  The distance travelled is about 48 km, flattish roads, breezy with plenty of coconut trees, kampongs and sea view. Oveall, It has been a great day ride with lots of laughter, fun and noise!I got a feeling we will be back soon...
Lastly, Zillion thanks to Clarence, Andy, Andrew, David, Mary, Billy, Mr Teo, KC for all the help to organise this wonderful ride!
more hi res photos and closeups here..

This is the Timbuk2 Handlebar mounted on my brompton which I got from Lifecycle. It is a handlebar bag which can be transformed into pouch bag. The mounting to the bike by velcro and works well.  I got it because it is pretty useful for the short jaunts around town and my daily morning rides. It can hold a small notebook, a small digital camera ,keys, phone and wallet.  Looking at it closeup, it is well made...on the packaging..it says "Crazy-tough Nylon with water resistant liner"... let's see how well it can take my rubbish. More detailed review after I use this for some time.  Photos to show how it all fits with my brompton. Nice right?

Momo is taking up Violin lessons at Sim Lim area and I need to wait for about 1 hour around town. So boring....what am I going to do? Luckily, I got Carryme in my van, parked at Waterloo street and did abit of SG City touring. Riding towards the SAM, I turn left towards City hall MRT station. There are see many historical sites around area. Raffles hotel, Civilian war memorial, Tan Kim Seng Fountain, Cenotaph, Indian National Army monument, Esplande, Fullerton hotel and of course the good ole Merlion. Pedal abit....stop....look, snap photo...repeat....
Hey, 1 hour passed... Got to head back to fetch my girl and get my Timbuk2 handlebar bag from Lifecycle.  This is only made possible with Carryme!  more photos here

Carryme as a walking alternative

I park my car at place about 15min walk from my office.... which now is shorten to 3 min with my Carrryme.A simple unfold, a few min of peddling and I will be at my office. Nice and comfy. Tucked discreetly under my desk, it is stealthy as a ninja. Until I unfold, ride to go home or look for good food places around my work area. Many of my co-workers will ask if it is rideable and stare....
It is a definitely  crowd pleaser if u fold and unfold.. And see them open their mouths .... "Ooohhh" and "ahhhs". Depending on my schedule, I let some of them take a short spin... and most of them are actually amazed of how well Carryme rides.
I like it a lot... It is fun, it works and brings a smile to anyone who rides it.Try one someday. It rides better than u think, really.

Mark ur calenders folks for 16th Jan 2011. We will go check out Tuas area!!... yes, I know it is very far from everywhere and not so convenient....but that's exactly why we will go and see what's out there! So far we have got 12 riders and many "maybes" Bring ur Cameras and Sunblock!
Ride details

Posted by Taiwoon at 2:44 PM No comments: