29th June 2012.
This is the much awaited LCSG Treasure hunt.
About 80 turned out to do this at Labrador MRT station. Many with the custom team tees. The mood was friendly yet competitive...  and all ready to rock.
Encik George, the brain child of LCSG treasure hunt gave the briefing while the LCSG angels went off to man their stations earlier to prepare for the "takan" session.
The format of the treasure hunt was as follows.
3 Stations to visit. At each location the teams would be asked to do some thing related to “old childhood games”
Full Set of photos here


Station 3: Steven Tang, Tiffany, Tiger and Diane @ Haw Villa. The task was to use coin and throw into a chalk circle. It must land inside a circle or keep throwing coins..


Lastly they have to find a series of locations to photograph/ID as a team
It was quite a blast to see everyone intensely working their butts and planning how to approach the issue. Some took the “lets go for the toughest one first as we have fresh legs” while some just “where har, where har” – Just whack.
The eventual winner was Rolling stones whom completed the whole event by 1030. They were on fire and according to Tiger Wan, they simply went flat out..  and u need to check their dance moves as they couldn’t spin the tops.. J

Overall, it was a day of fun, sweat and laughter. The folks went back with a greater understanding of the geography and a deeper friendship that can only be formed when people “suffer” together.

A very very big thank you Encik George for the planning and ideas. Desmond Chia for offering to drive us around to see if pple cheat haha.
Keng Yong, Berenda, Vince, Ming Tian, Steven Tang, Tiger , Tiffany and Diana for manning the stations. Uncle KC, Darren for the photography work.   Axis cycles and Andy yap for sponsoring the prizes.

A friend asked me for advice on what luggage to get to travel with a Brompton. My answer was either a cardboard box, stuff all ur clothes inside. Or get the Lojel. 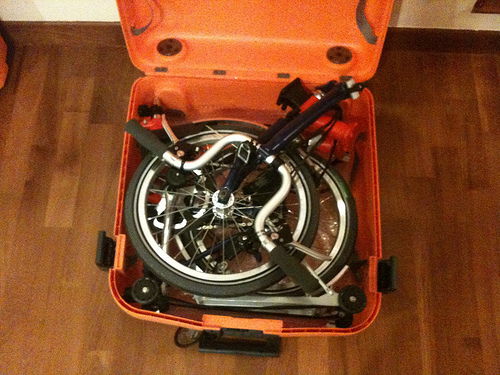 And I realized I did not post a photo of it before. So here's the communal consolidation with the help of Lovecyclingsg folks.
It seems like a tossup between Lojel and Vincita. Difference is Lojel is a hardcase which weights more but provides more protection. While Vincita is a soft padded case which is lighter but perhaps less protected(but I think is really ok)
Diane very nice review of the Vincita soft case here

Good video by NYCe on travel case for Brompton

Notice on the lower section, there it a "time line" so u can skip directly to the topic you need. Super informative and clever video editing.

Posted by Taiwoon at 6:54 AM No comments:

What a nice basket idea using the frame from Brompton. Available from Dutch Bike Bits

Recently I acquired a Reba fork and the initial plan was to install it all by myself.  But then, I didn't have the tools to do the star nut and so I thought why not pay a visit to C2C to get that done. I am damn glad I did. Nat with his trained hands, made short work and in under 10 min( cuz I knew how much to cut, having test rode without star nut).  Now I just need more saddle time and dirt. Green Corridor, here I come!

Thought of the day

It was drizzling slightly on my way to work so I decided to park at IMM and walk instead. As I waited for the green man, I met a grand pa with his grandson. They were on the way to Creative technology child care. The elderly gentleman smiled and I smiled back in return. The lucky grandson was sitting there contently. This is just a normal day to school.
As they rode off and along the pavement. My thoughts were, this(cycling) is a great way to move around. The busy traffic buzzed me by and a thought bubble formed... "could we take it slow a little, show a little consideration for everyone. Watch out for the weak and vulnerable. We all will grow old someday. " 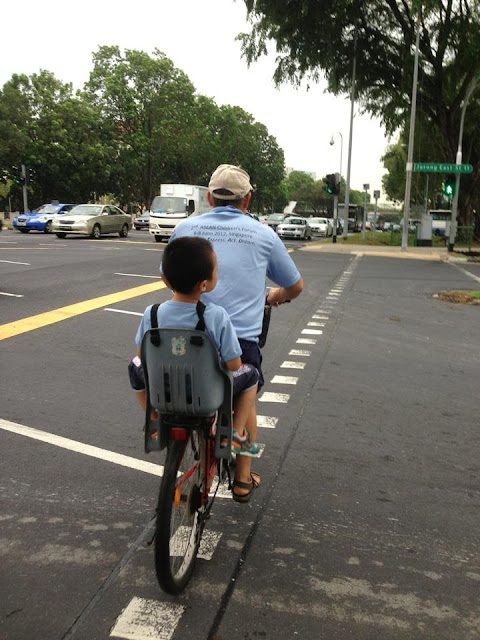 I love the communal spirit and this is one cool jersey! Created by Joeel Lee for Lovecyclingsg. If you look closely you will see all the Singapore elements and food icons.
No one told him to do it, he just did. And that's FXXXXing awesome!

This was where I spend my "poly days" and it is gone. Goodbye my friend and we will always remember you. Also glad I had a chance to share this place with lovecyclingsg folks. No, it is not a historical significant for the county but it remains a special place in my heart.
If I may suggest. Please go out and look at the places you grew up. Better still bring your kids, share with them how things used to be and not just air conditioned shopping centers, Ipad games. So they are also able to see another part of the Singapore landscape.
Posted by Taiwoon at 7:14 AM No comments: