Cycling was again featured on Singapore Straits Times. Francis and myself gave lots of input to the reporter but due to the space given, she had to pare it down. Well, still it is good awareness for SG cyclists but it is still dangerous on the roads. I also shared what I use to keep the odds higher for myself. The actual article here.
Cyclists renew calls for rights
Recent deaths of two riders reignite demands for tougher laws
Last Monday, some 140 cyclists embarked on a Ride of Silence ending at Changi Coast Road to honour the memory of a fellow rider who died there a few days earlier.
Mr Jude Alphonsus Tan, 25, was cycling with a group of friends when he was knocked down by a lorry on May 26. He died instantly.
Two days after Mr Tan’s accident, another cyclist was hit and killed by a van in Senoko South Road.
The two deaths have reignited calls for greater rights and protection on the road for cyclists.
With more and more Singaporeans choosing to cycle as a means of transport or recreation, cyclists say there should be tougher laws to penalise errant drivers, and dedicated bike lanes on roads to keep drivers at a distance.
Cyclists, they say, have every right to be on the road.
Said Mr Steven Lim, president of the Safe Cycling Task Force: “That’s been established long ago, in the Road Traffic Act. Now it’s up to road users to recognise and respect that.”
In online forums, cyclists have been blamed unfairly for road accidents involving them, some cyclists said.
Mr Albert Yeo, 46, said that many drivers feel cyclists should stay off the road.
Such views encourage reckless driving, he said.
“Motorists think that I shouldn’t be there, so they cut in front of me.”
At least 10 cyclists have been killed in road accidents this year so far. Since 2009, about 16 cyclists have died a year.
There were 16 cyclist deaths in London last year – a city with 7.8 million people to Singapore’s 5.2 million. London has bike lanes in some parts of the city.
Cyclists here said that tougher laws may reduce the number of cycling-related deaths. They cited a recent case, where a doctor who killed a cyclist and injured another two years ago was sentenced to four weeks’ jail and a five-year driving ban.
He could have been jailed up to two years and fined up to $10,000.
“Drivers have the power to kill,” said Mr Woon Tai Woon, 38, who heads the social group LoveCyclingSG.
“A light sentence gives drivers the perception that they can get away with it.”
Another way may be to introduce dedicated bicycle lanes on roads – though the Land Transport Authority (LTA) said land constraints here rule them out.
What about road markings, the cyclists asked. A reminder for drivers to keep a distance of 1.5m would help protect them, they said.
But LTA said such markings could give cyclists a “false sense of security”. Traffic Police said a 1.5m gap is a guide which drivers might not always be able to keep to.
For now, there is only patience, and public awareness.
MP Teo Ser Luck, who chairs the Cycling Facilitation Committee set up in 2009 to engage stakeholders on cycling issues, said that Singapore’s road culture must shed its tendency towards “speeding, impatience, and not giving way”.
Cyclists, too, know they must play their part.
Said Mr Woon: “Even if you have the right of way, you have to cycle safely. When you’re up against a car, you can’t win.” 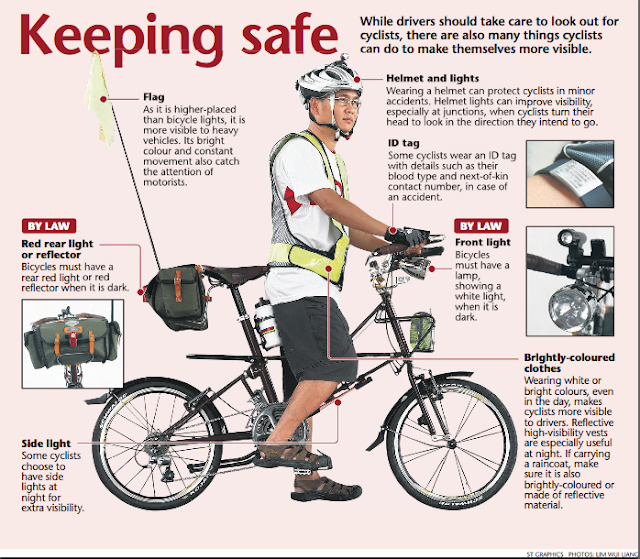