14th April 21, 2013.  Sun, Day 2
Distance: 75km. Flat but windy. Uber Steep section at the lighthouse
Fulong to Ciao Ling Tunnel.
Fulong- Ciao Ling Tunnel Coastal line – 三貂角燈塔 Lighthouse and Jiao Si
Route is here in case u like to do the ride  http://tour.ntpc.gov.tw/page.aspx?wtp=3&wnd=314
Full set of Photos here
Woke up and cannot believe that we are actually at Taiwan!
We assembled after breakfast at the lobby for Encik pre-ride briefing. It was raining lightly but still we were all eager to go.
First spot was the Ciao Ling Tunnel. This was a disused Train Tunnel converted to a cycling path. I like the fact that they did not totally erase the former train tracks but sensitively added a new function – a 2 km long sheltered cycling path!  It was fun and abit surreal to be riding with drafty cold wind inside the tunnel. As u reached the end, the sea, wind and sunshine greets you. Like they always say, there is light at the end of the tunnel!
Mummy and Momo also did their first Taiwan ride with the rest of the riders. I was so proud of Momo on her first “overseas cycle ride!”  Kim mentioned to me that Momo later slept like a log in the van. KO-ed from the effort... haha 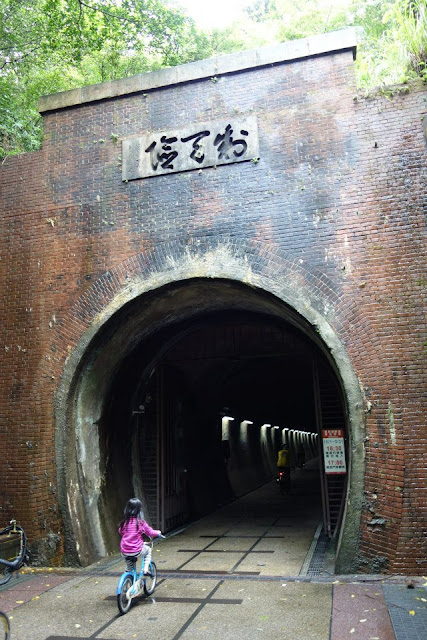 We then followed Taiwan northeastern coastline via the Longmen-YanLiao Bike path to the San Diao Jiao Lighthouse. The rain came down and we had strong front/side winds.
My flag flapped around like crazy and flew off several times. I had to collapse and keep it in my pannier bag. It was quite an exhausting experience battling the strong cross/head winds.
Another challenge appeared before us soon, the short but super steep slope of the San Diao Jiao Lighthouse.  This was about 20 percent gradient constant all the way up. I was on my compact crank and last rear 28 teethn gear. It was still painfully hard to crank up the slope. My meter read at times 4km/hr and I knew it was better to just push up the slope(some section).  Esther joined me at the rear and tried as much as possible to crank up.. but it was impossible. So we walked up, laughing at ourselves and enjoying the beautiful scenery.
At the lighthouse, the winds were even stronger. We trembled as most of us were wet with sweat with the howling winds. To make it even more interesting, we chose the spot to have our break and lunch. Some hid in the support vehicle to escape the winds and have a meal. Marcus and myself wandered around and hid in the lighthouse personale office.  I chatted with Marcus :”wonder how Tai Ping Shan would be like?” That will be tomorrow and today was supposedly an easy/flattish day. Need to conserve and pace my knees. (Self reminder)
We decended the steep incline and rolled along the coastline. The view was fantastic. The fishing harbour/shelter which Uncle KC shared was design/built to keep the boats safe during typhoon season.
The wet roads meant lots of splashes and if you don't have fenders, your jersey will have a nice road “rooster pattern”. I was really glad I prepared my Bike Friday Pocket rocket with the full fenders. It wasn’t the most beautiful thing to have on a nice bike but the fenders really made the ride so much more comfortable. Also the bike performed beautifully at flat coastal stretches, it was really enjoyable to put the bike thru the paces and have a nice pace without  over exerting myself.
All this time, I reminded my self, “pace yourself. Only day one and supposed to be easy ride. Tomorrow will be the siong one… “
In about 1.5hours we made it to Jiao Si. This is a place which is famous for Onsen. We were glad to reach the end and celebrated but having a foot spa at the town communal hotspring.

Desmond saw a long Q forming and sure enough he Q-ed too. It was Spring onion pancake and was the best I ever tasted. Maybe we were all hungry but the 8 pancakes was gone in minutes.
We then went to the hotel which was located nearby. To cater for our bicycles, they gave us a conference room so that we can have a more secure parking for our precious steeds. Encik used the meeting white board to show us Tai Ping Shan gradient. All the way up. About 2200 metres. Will be cold, prepare cold weather gear. Gulp… ... ready or not. TPS, here we come! Photo credits to Uncle KC, Ying Chan and Desmond Chia