Rider Profile- Desmond Chia
* Tell me about yourself (your day job and family)
My day job is in a Government Department that is collecting taxes (hee hee…. So, please be mindful when chatting with me).   Happily married with a 4 year old princess.

* How did you started cycling
My dad bought me my first Chopper bicycle during Primary 6 December school holiday, after I did well in my PSLE exams (That was his reward as promised by him).  So for the whole of December school holidays, I was busy learning how to ride inside the house and at the void deck.  Cannot remember how long it took for me to pick up the skill but anyway, back then no PCN to ride and parents forbid me to ride on the road, so most of the time is round and round the void deck.

* Why do you like cycling?
Like the feel of freedom, relax and wind in my “short” hair.  Also as a form of exercise as I dislike jogging and having a problematic ankle, cycling helps to reduce further damage to that ankle.

* When u met LCSG - how was it like and how u meet us
I have told the story of how I joined LCSG several times.   I was introduced to LCSG by Eddie Hooi.  We knew each other from a car forum where we used to talk about modifying cars, ICE system etc.  After a while, both of us cooled down from the car forum and I started to see his cycling pictures on Facebook.  At that time, I had a Dahon Vitesse D7 and most of the time, I rode alone either at Changi coastal PCN or Seletar camp.  So, through Eddie’s recommendation, I joined LCSG forum and the first ride was a night ride on 3 Jun 2011.  On that night at the carpark opposite Kallang MRT Station, I met the group and wow…… what an amazing sight….. all of them were like moving Christmas trees with blinking lights of all colours on the bicycles, on the riders and on the helmets!!!  After a short safety briefing, we headed down Guillemard, Paya Lebar towards Chomp Chomp Food Centre.  Me being a leisure cyclist, was slowly falling behind and a very nice and friendly cyclist stayed with me and chatted with me all the way to Serangoon Gardens.  He was none other than our LCSG poster boy, Mr Zack Tay!  Later, I soon learned that he bo-pian and had to accompany me cos he was the sweeper, and true to the LCSG spirit of “we leave no one behind”.

One month later, I joined the first ever LCSG 128km Iron Butt round island ride and met other wonderful people like Mr Ben & Jerry George Lim, Adriane Lee, Darren, Adeline Tan, Audrey Cheong and Papa Mike….. and the rest was history. I was hooked to the spirit of this group!

* Your steel horses- names and more details.
1st Bike – a classic Chopper bike when I was in Primary 6.
2nd Bike – a 2nd hand MTB that I bought for $200, used it for Endau Rompin and Trengganu off road trips. Sold off in 1999 after about two years of riding.
3rd Bike – 2nd hand Dahon Vitesse D7, bought in 2008 mainly for exercise and use it to “Park & Ride”* to work.  Sold after buying my 2nd hand Brompton.
4th Bike – 2nd hand Dahon Mu P24, bought it shortly after joining LCSG, main purpose was for the first 128km Iron Butt ride, which I completed the ride with it.  Sold after buying my new Bike Friday.
5th Bike – 2nd hand Scott MTB, bought it primarily to fix a child seat to bring my princess for LCSG rides.  Sold after buying my new Bike Friday.
6th Bike – 2nd hand orange colour Brompton named Zoe.  Poisoned by many Brompton riders, especially Adrianne during one Pengarrang ride.
7th Bike – NEW merlot colour Bike Friday New World Tourist named Merlot.  My only NEW bike (not counting my 1st bike from my dad).  Bought it mainly because of the Taiwan trip in March 2012 when we climbed the 3275m 武嶺.  I know I wasn’t that fit and required a bike with 3 chainrings to tackle the continuous slops of武嶺.
8th Bike – to be revealed………………. (hee hee……) 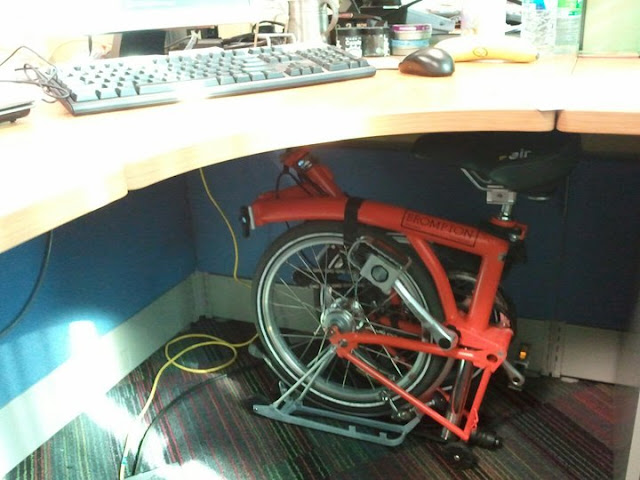 * Your role at LCSG
No role lah….. will help out here and there whenever I can.

* Tips to share with fellow riders
Safety is the main thing.  Be aware of your surroundings, be it traffic, road condition, pedestrians, even the trees along the road(fallen branches are dangerous).  Ride safe to be home with your love ones.
* Who would u like to see being featured in Smallwheelbigsmile? Arrow some one to be featured...