The much awaited LCSG 128 km night ride finally came.
Photos are all here.   Route we took is here.
This time prior the ride, we decided to do it with qualifying timing. Reason being with the last few 128km ride, the groups were strung out very far, which made the sweepers task very very challenging. Over the last 2 months, many"Q" rides were organized by the Westie warriors, Eastie bunnies and also PNR. The Qualifying ride was a 50km under 2.5hrs... and all made it. This training made the transition to 128km so much smoother.
Thanks to Boon Chun... we also have video footage(yeahhh!!)  to remember the nice 128 ride!


As the people came in, West Coast Park Mac Donalds was bustling with activities. Those who came later had trouble find parking... so next time come earlier:)  Registration was handled ably by Andy and Zack and for Team PNR, Lisa and Tiger did it with min fuss.
Every one was laughing and raring to go! Zack did the safety briefing- obey traffic lights, no beating of red lights and I shared again about the LCSG spirit. This is not a race. We ride as a team, eat as a team and complete as a team.

Speedy Gonzales led by Zack, assisted by Uncle KC and Ming Zhi went first. They skipped many stop s and their first pitstop was at Kranji 7-11. They were so quick that by 2 am, they completed and was thinking if they should do another round...  gulp.
Team Wildboar was led by Vince Li, assisted by Louis Lee and Ming Tian. Also made good time and chop chop finish the ride by 3 ish.

Team Turtle Led by Encik George Lim, assisted by Boon Chun and Boo very rude went on a ride and very very shiong eating expedition. They even stopped at Chinatown in the early morning to have a super duper porridge. Steady lah.

Team Snail was intitally led by Darren Siow who knows the West section of SG very well. Thanks mate for stepping up. Assisted by Desmond Chia, Andy and myself. The team made good time and I was very impressed by the overall cohesion. Ejin Brompton gears was stuck in gear 5 and she still kept on going. Many of us had sore bums but we gamely pressed on. Nice. Even nicer when George Kee drove behind us taking photos and providing some level of safety. Thanks George! 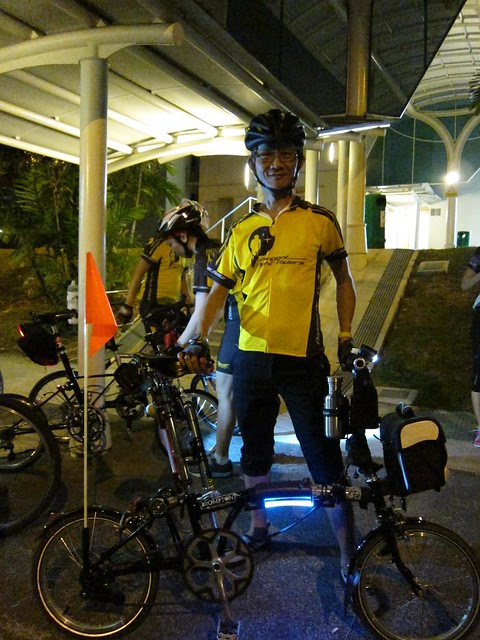 Team PNR 1 and 2 were impressive. With their yellow black jersey combo, walkie talkies and flashing lights... it felt like an army operation. Their smilies and laughter was quite infectious too. Esp when we gathered at the pitstop and chit chat. They were very very prepared, Keng Yong and Edmund drove safety vehicles loaded with drinks. So when the group stopped... the riders could get the hydration easily. Very thoughtful and excellent planning. Well done PNR team!

Overall,  I am very impressed by the level of fitness and kampong spirit. Leaving no man behind and riding as a team. Also with the kindness by many folks. GL and his family stood at the Admiralty MRT waiting with bananas at hand.. that was quite a special moment for me. Thank you GL and family!
The "Q" rides definitely helped and let's keep the LCSG kampong spirit burning proud and strong.  Hmmm... maybe we must add more challenge to this event.. maybe KODH section too? hahah. ... rock on!